According to the Financial Times, the development of wind and solar power plants in Vietnam is proving the importance of renewable energy in promoting economic growth and combating climate change.

As mentioned in the Financial Times wrote, the southern coast of Vietnam has a bundle of advantages of wind. With an average speed of more than 10m/s, Vietnam’s territorial sea is in the top 10% of the windiest places on the planet.

Vietnam, a country with nearly 100 million people and GDP growth of 7% in 2019, has energy consumption of  more than double since 2010, while the average Vietnamese power used is only half that of neighboring China.

Still, the efforts of small industrialized nations can still make a big difference in the fight against climate change. Steve Liberatore, ESG’s head of fixed income strategy at Nuveen (a US wealth management firm) explains: “The addition of a renewable energy project to a developing nation’s grid. will compensate or replace a higher rate of fossil fuels than the developed country “.

According to the United Nations (UN’s Emissions Gap Report 2020), success in managing the transition to green energy will help developing countries leap beyond carbon-intensive technologies. which underpins richer nations. 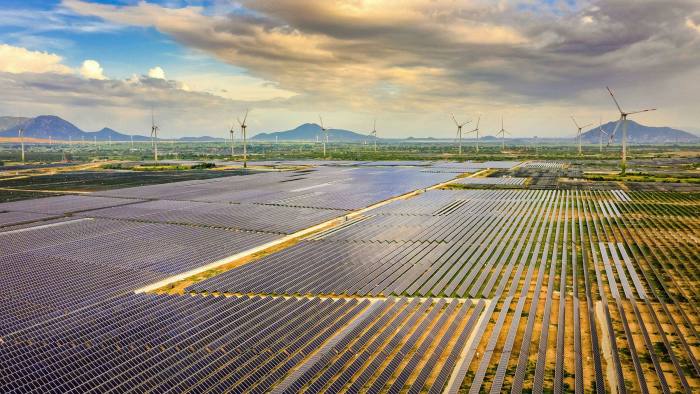 What Vietnam has to focus on offshore wind farm?

In the case of Vietnam, the waters off the southern coast are ideal for offshore wind turbines, which are crucial to the nation’s plan to increase the share of wind and solar power from 10% in 2019 to 42% in joining the national grid in 2045.

Thu Vu, an energy financial analyst at the Institute of Energy Economics and Financial Analysis, a research organization in Ohio, said that until 2018, Vietnam did not have any solar power projects at any scale and very few wind power projects.

However, according to draft PDP VIII, Vietnam has not yet appreciated the speed of energy transition, Ms. Vu said. According to the International Renewable Energy Agency (IRENA), Vietnam’s solar and wind power output will increase by 237% and 60% by 2020, respectively, bringing the share of these sources to 25%, nearly a decade ahead of plan.

The Danish Energy Agency (DEA) affirmed that although most of the existing wind power projects are located on the mainland, the land restrictions mean that Vietnam will have to focus on offshore wind farm.

The southern coast of Vietnam has abundance of wind. With an average wind speed of more than 10m/s, Vietnam’s territorial sea is in the top 10% of the windiest places on the planet.

“Many other countries in the region have good wind speeds,” said Adrian Dempsey, Chief Financial Officer Asia-Pacific at Mainstream Renewable Power – an Irish energy company with operations in Vietnam. restricted by the deep sea “.

The offshore waters in Binh Thuan and Soc Trang provinces – where developers, including Mainstream, plan to build billions of dollars worth of wind power farms offshore – are also relatively shallow, with depths from 20m to 50m.

According to World Bank (WB), Vietnam has the potential to produce 475GW of offshore wind power each year in waters from shore up to 200km, about 20 times the country’s total potential capacity of onshore wind power. However, despite the potential for energy supply in Vietnam, very few large-scale foreign projects have been added to draft PDP VIII, mainly due to regulatory complexity and investment risks. .

Ms. Vu informed: “The 2030 target for offshore wind is limited to 2GW-3GW. This shows that the Government is still considering.” She also noted that the costs of offshore projects are higher than those on the shore or near the shore.

Ian Hatton, President of Enterprize Energy, a British renewable energy company, stated that in order to reduce costs, Vietnam must improve its infrastructure. In particular, Vietnam could electrically link up with northern cities, build substations and lay cables along the seabed for offshore production or find alternatives. Enterprize is experimenting with converting wind and seawater energy into hydrogen.

However, success in Vietnam’s renewable energy sector also comes with risks. In 2019, the government encouraged investment by tax incentives, from which the grid was added 4.46GW from 82 solar power plants, leading to oversupply, forcing factories to cut down quantity.

It is a prime example of the dilemma facing low- and middle-income countries, including Vietnam: if they produce enough energy to meet demand without improving their muscle mass. Additional capacity or transmission infrastructure may be wasted.

The Government of Vietnam emphasized that it is necessary to invest USD 128.3 billion in upgrading infrastructure and adding power generation capacity in the next decade, including foreign capital. Mr. William Gaillard, Vice President of wind turbine manufacturer Vestas, believes that Vietnam has become a “role model” for other countries. “The combination of an attractive FIT tariff, goals and a transparent licensing process has been a key factor in ‘unlocking’ this market,” he concludes.